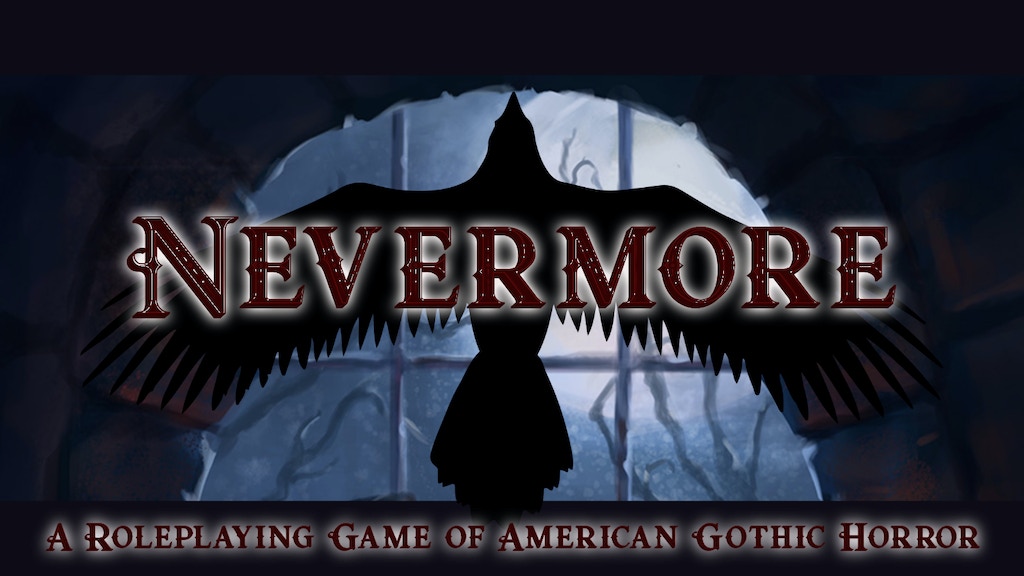 A Roleplaying Game of American Gothic Horror. Due to fluctuating global shipping rates, we will be charging shipping fees at a later date. We will keep you updated through Kickstarter Updates for when shipping fees will be applied to your pre-order. Thank you for your patience and understanding!

Latest Updates from Our Project:

It's been a couple of months since I made an update so I figured I'd poke my head up from the computer to fill you in on what's going on.

Text and rules-wise I am in the middle of making revisions and updates as well as writing the setting material that is still needed. I'm going to be running a few playtests in February and March to test out the revisions and make sure things are going in the direction we want to go. Most of the revisions involve simplifying things to make gameplay easier and faster. As soon as the rules are finalized, I will be working to update the free QuickStart. Nicky Rea is hard at work on the section of the book dealing with the Appalachians and First Nations. I've received some outlines from her and things are looking good. I've received the final draft of the short story for the book opening from Rich Dansky and it does not disappoint! The title is Green Eyes in the Dark and it tangentially involves a story by Ambrose Bierce.

The art for the book is coming together. I decide to spend a chunk of Patreon money I've saved up to order two full-page pieces from the cover artist, Yulia Zhuchkova. There are going to be placed in the book as section openers for the player's section and the narrator's section.  I already have the final of one of them and just went through some possible sketches for the second.  They are both going to be amazing! Yulia is a Ukrainian artist, currently living in Poland while her husband fights in Ukraine, and it has been an honor to be able to work with her.  I've also contracted several new pieces from the talented Amanda Khal and I'm working with another artist on the chapter openers. Finally, Marc Hudgins has agreed to do the map of Baltimore city which was one of the stretch goals. Marc is an art director for Elder Scrolls Online as well as an all-around amazing artist (and person) and has a deep love of maps.

Nevermore is now available on Backerkit for UK and EU customers and you can still get Kickstarter pricing, so let your friends know! The Nepenthe Games Discord is now up and running so feel free to pop by and say hi.

And if you want to see EVERYTHING that is going on with Nevermore: art as it arrives, chapters as they are completed, and get invites to playtests, consider joining my Patreon.

That's about all for now. I don't want to spam folks with emails so unless something big happens you can expect to hear from me every 6-8 weeks until release. Of course, feel free to reach out at any time with your questions or comments. I love to hear from folks!

Have a great weekend and MLK Day!

First, thanks again for helping to make the Nevermore Kickstarter a success! I plan on keeping updates to about once a month or so. That should be enough to keep you all up to date but not flood your inbox.

We won't be sending out surveys until we get closer to publication, so you don't need to worry about that yet. The game is now available for late pledges and pre-orders on Backerkit. So, if you have any friends who were interested in pledging but missed the Kickstarter they can still get the Kickstarter pricing and save a little cash.

Contracts have been sent out to Nicky Rae and Rich Dansky and I'm working on hiring artists for the remaining artwork. I'm also working with the amazing Marc Hudgins on the map of Baltimore City and I've hired the talented Yulia Zhuchkova to do two full-page color illustrations for the interior that will be openers for the Protagonist and Narrator sections of the book. Yulia also did the cover and she is a Ukranian artist who is currently living in Poland so it makes me super happy to be able to hire her again. I'll have more art details in the December update.

Other than that, I've begun my final re-write and development of the game systems as well as writing the setting material. We'll also be doing more playtests over the coming months.


Now back to work! Lots to do!

Thanks to all of you wonderful people we did it! Not only did we meet the Kickstarter goal, but we surpassed it. Our final tally is 382 backers for $22,394. Not bad for our first Kickstarter! I also want to give a special shout-out to the folks on my Patreon who were instrumental in making this all possible.  Their donations went to things like artwork (both the cover and interior), a new printer,  and an occasional cup of coffee... all the things a writer/designer needs to keep going.

I was so excited to see us hit the 22k stretch goal in the last minutes. I'm really looking forward to working on those new cabals.  Speaking of which, it's time to get to work. I've got art orders to place, a map to order, contracts to write for Nicky Rae and Richard Dansky, and much more.

I can't even say how thrilled I am that after two years of working on this thing it's going to become a reality and you all are a part of that. But before I dive back in I'm going to take the weekend to rest up and celebrate a little.  Have a wonderful weekend!

Since the last update we've unlocked two stretch goals - Rules for Building a Lodge and the Nevermore Narrator's Kit and we're almost half way to the next! You can find more details on both of those in the last Update. Now let's talk about the next two stretch goals.

1880s Map of Baltimore City - I'm super excited about this one! This will be a fold-out map that comes with the core rulebook. Baltimore is the core setting for Nevermore so this map will be invaluable for both players and narrators. It will highlight important areas in the city both historically and in the world of Nevermore.

Nevermore Props and VTT Kit - Anyone who has ever gamed with me knows that I love a good text prop. This Kit will be chock full of cool PDF text props that you can print out to use in your Nevermore tales. It will include letterhead, calling cards, mysterious newspaper clippings, and more.  You can print these out to use at the table or use them in your VTT game. There will also be VTT character tokens for all of the supporting characters (NPCs) in all published adventures as well as for the Protagonist Pre-gens. And we'll even include a PDF version of the 1880s map of Baltimore.

So, what else is new?

I had a wonderful interview with Roleplayer with a Thousand Faces where we talk about Nevermore, Changeling: The Dreaming, and ttRPGs in general. I highly recommend his stream! You can find that here.

And finally, I want to take a moment to introduce one of our artists. If you like the Nevermore cover and you enjoy Gothic Horror-related art you should check out our cover artist, Yulia Zhuchkova on Art Station. She's a Ukrainian artist (currently living in Poland) whom I was lucky enough to find. Personally, I think she did an amazing job,  and if all goes well, I look forward to hiring her for additional covers.

Stretch Goal #3, The Curse of Whiskey Springs is now unlocked!

Like The Hound, this will be an 8-12k word PDF adventure, complete with maps and original art. As per the title, it takes place in the fictional town of Whiskey Springs, a mining and iron smelting town in the Appalachian mountains of south central PA. I can't say too much more without giving away the plot, but suffice it to say there are tragic deaths, terrible murders, and maybe a ghost or three.

The next two stretch goals are now posted.

They are Rules for Building a Lodge(eight additional pages added to the core rulebook) and a 24-page PDF booklet called Nevermore Narrator's Kit.

The Lodge
Every chapter of the Esoteric Order of the Illuminous has a lodge where the protagonists gather to research possible cases and socialize. The lodge might provide access to a library, workshops, supplies, or any number of other resources.

These additional pages will offer expanded rules for designing the lodge, almost as if it were another protagonist. The players will be able to mutually make decisions about where the lodge is located and what it looks like as well as purchasing advantages (such as a weapons locker, telegraph machine, or a library or workshops) or flaws (such as sinister reputation, rough neighborhood, or even haunted). There will also be some additional history and background on the Illuminous itself.

Want to more about Nevermore? I have two upcoming podcast interviews. The Gaming Monk on October 19th and Roleplayer with a Thousand Faces on October 24th. We'll also be picking up a new Nevermore actual play on Nat21 Adventures starting Thursday, October 20th. Follow the Nepenthe Games on Twitter or Facebook.

Thank you all again for supporting Nevermore and spreading the word. Let's keep it going and hit that next stretch goal soon!